“We need [Black] communities that we can bring all parts of us to, and not just some parts of us.”

This year marks the 10th anniversary of the Black Daddies Club (BDC). When I started BDC in November 2007, it came from a need in my lived experience as a Black father. Living in Malvern, in the east end of Toronto, I was constantly being told that there weren’t any resources or programming for Black fathers in my neighbourhood. I also recognized that the majority of media outlets in Canada, when speaking about Black fathers, spoke primarily of negative stereotypes, painting the spectrum of Black masculinities with broad strokes, and stigmatizing Black men as “deadbeat dads” who are irresponsible, criminal, dangerous, and un-human.

Over the past 10 years, there have been many beautiful people who have supported BDC in a multitude of ways, through sharing their narratives as Black parents in our research projects, or in various documentaries that BDC has co-created with folks in the Black community. We have forged meaningful partnerships that have created fortifying experiences for Black families and community members over the years.  Significant is the fact that BDC has never applied for government funding for any of the over one hundred activities produced over the last decade. We have worked with community partners, volunteers and community members to make this work happen. To all the volunteers that have put in their time, sweat, money and love…the folks at BDC wish to convey our profound gratitude.

I have learned a lot over the past 10 years, and I am still learning a lot about myself.  I earned a Master’s degree by taking my community work into academia and interrogating Black masculinities and Black love. I have made some really dope friendships along this beautiful journey. I have also found, while doing this community work, that it has been difficult to find communities and spaces where I am able to un-mask myself—to take off my armour and be vulnerable—which is such a necessary part of being able to sustain this work. I have gone through depression, and worked multiple odd jobs to sustain the community work that I am doing with BDC. I have been through burnout more times than I can count, and learned that this work requires self-care and self-love.

I have met some awesome people and heard many incredible stories. I have found myself feeling hopeful, as well as hopeless, doing this work. I feel hopeful because I have had the opportunity to witness social activism, in response to anti-Black racism, become more mainstream. Groups, such as Black Lives Matters Toronto (BLMTO), are furthering the Black liberation work in Toronto—work started by groups such as the Black Action Defence Committee (BADC). However, my feeling of hopelessness comes from speaking to elders who came to Canada in the 1970s, faced issues of erasure and oppression attending high school, and now have grandchildren facing similar issues in their school system in the Greater Toronto Area (GTA). It makes me wonder, is anti-Black racism declining or increasing, on a systematic and political level, in Canada?

For our 10-year anniversary, BDC is celebrating Black love, unapologetically declaring that 2017 is the time for Black folks to love ourselves completely, and more than ever before. As we look at Canadian statistics they show that Black communities are showing up in various Canadian research findings in the areas of criminal justice, unemployment, subsidized housing, children’s aid services, and many more.

In an era in Canada where we see police murder Black people and get no jail time; an era where we see that the intersection of mental illness and Blackness can be deadly; in an era where we see racialized and marginalized communities become erased in the name of revitalization and gentrification—from Africville to Regent Park; in an era that teaches Black children to grow up hating themselves or not seeing themselves as human beings. We, as the Black Canadian community, must push back and resist those racist ideologies. We must re-imagine our Black future here in Canada, while recognizing this is stolen land. It is important for us to do the work of collaborating with our Indigenous brothers and sisters, the original caretakers of this land.

Black Daddies Club will be celebrating our learnings of the past 10 years through the Black Love Matters 2017 Un-Conference. This un-conference is a series of events building awareness about our distinct ways of engaging with each other, as Black people. We began in 2016 with Breaking Bread brunches, where we engaged with the Black community across the GTA to start shaping the conversations the community would like to engage in at the un-conference. After a year-long process of community consultations, requests were put forward that the following elements be a part of the Black Love Matters 2017 Un-Conference: 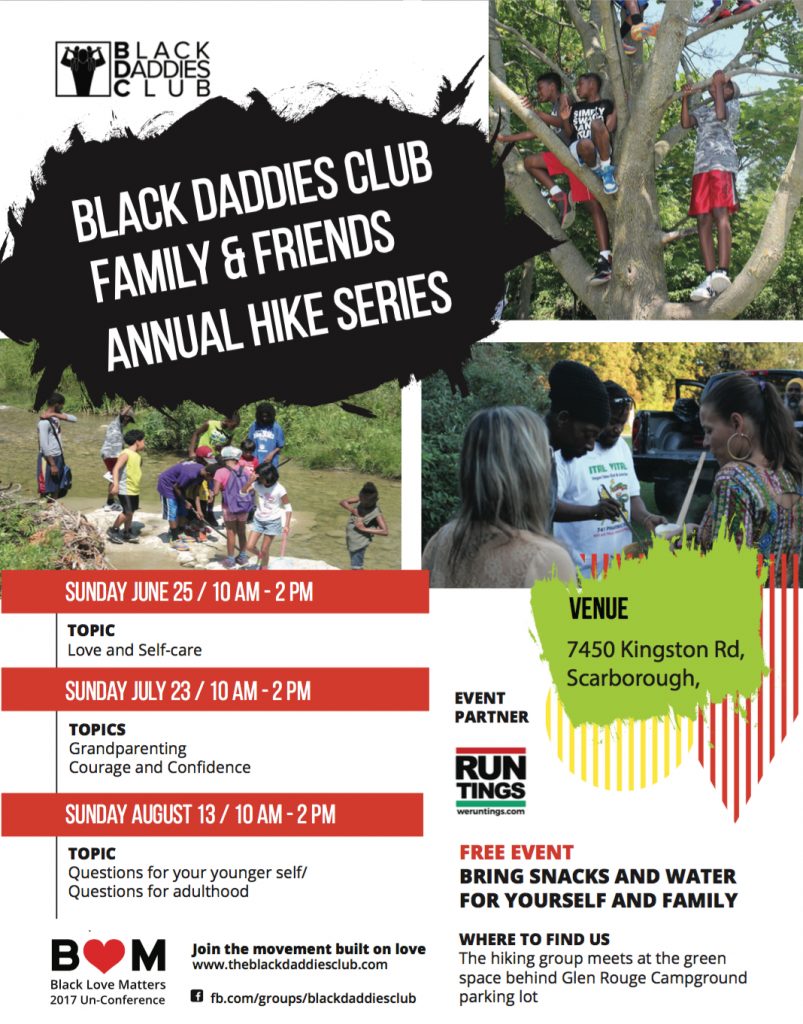 Apart of the Black Love Matters Un-conference, Black Daddies Club will be hosting a summer series called Black Family Matters, apart of these series will be our yearly summer hikes. The Black Daddies Club summer hikes will be a series of hikes that takes place one sunday a month for the Months of June (25th), July (23rd) and August (13th), 2017. The purpose of these hikes are for Black Families to gather at Glen Rouge conservation park (Scarborough/ Pickering border) Sunday morning’s starting at 10AM to 2pm, and spending the early part of the day, walking and discussing topics as a group. Some of the goals of the hikes is to create community at basic level, but on a deeper level, these hikes are about reconnecting with the land and having our children as well adults reconnect with what it means to learn from nature.

People have to engage with three different people throughout the duration of these hikes, this promotes the idea of people speaking with new individuals and getting to know knew people.

Cost: Free, bring snacks and water for yourself and family

Dates and topics for the hikes:

These hikes are open to people of all genders, race and religious background, however the premise of these hikes are on the importance of the Black families, Black community at large gathering and claiming space to have dialogue together. With that being said, we also see the importance of other cultures being apart of these walks, so that there can be mutual learning and sharing in the process of these walks.

Apart of the Black Daddies Club, Black Love Matters 2017 Un-Conference, we will be introducing “A Jamaica Mi Come From” jam series, the purpose of this event is to raise funds for Black Daddies Club, to ensure that we are able to continue to do community based initiatives. 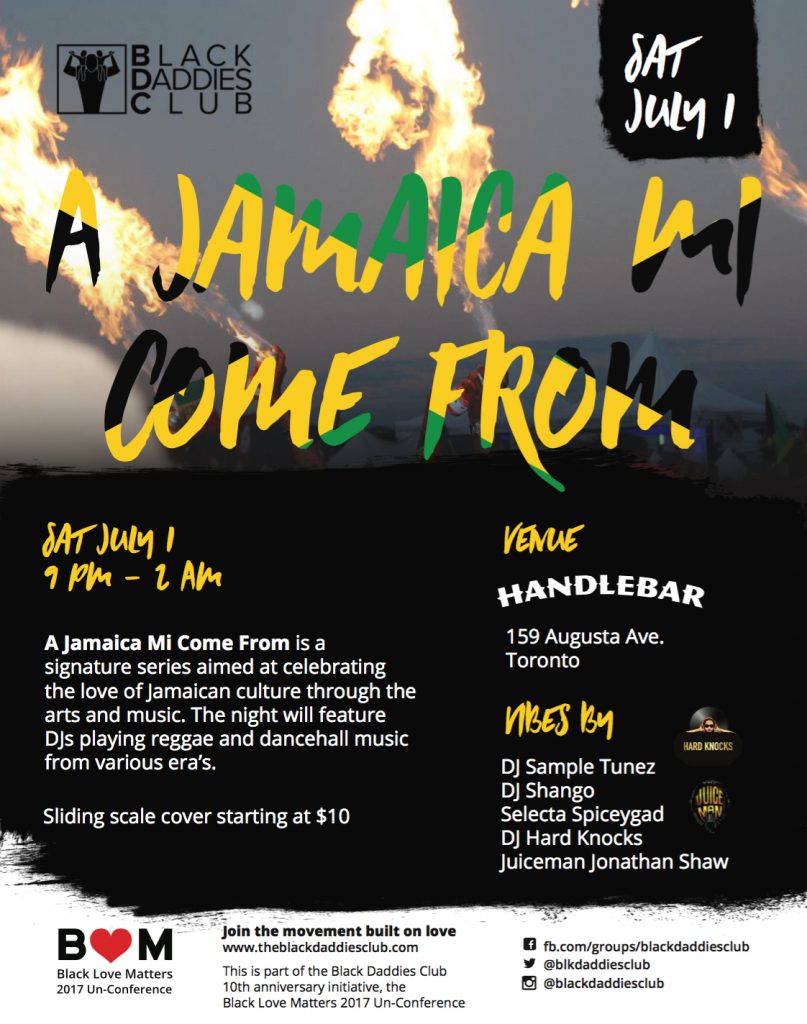 A Jamaica Mi Come from is a cultural series celebrating the Jamaican diaspora through various disciplines in arts and culture. In July 2017, we will be having the first ever session of “A Jamaica Mi Come From”, where participants will be exposed to Reggae music  that comes from Jamaica. These musical selections will be spun by various DJ’s from Greater Toronto Area (GTA), these DJ’s will be exploring various eras of reggae, moving from Ska to Dancehall. The night will also feature Toronto based fashion designers who also have roots in Jamaica, and their designs capture the mix of what it means to be African-Jamaicans living in Canada.

The event will take place at Handlebar in kensington Market, located on Augusta, on Saturday, July 1st, 2017(Canada Day), from 9pm to 2am

Cost of this event is a sliding rate starting at $10